Realm of the Polar Bear

Sail through Norway’s Arctic past glaciers lit by the midnight sun to find a most mythic predator: the polar bear. This polar adventure is to the famed Svalbard Archipelago of northern Norway. Located between the North Pole and Norway, these islands are home to one of the greatest concentrations of polar bears on Earth. This region remains wild and pristine with its vast mountains, dramatic fjords, massive glaciers, and picturesque icebergs coupled with iconic Arctic wildlife. The primary mission of professional photographer leader Scott Davis is to provide you with skills and opportunities to produce quality images of unique Arctic wildlife and beautiful landscapes.

Scott is a professional photographer specializing in wildlife, nature, and travel. Originally trained as a wildlife and marine biologist, his research and photo assignments have taken him to the far corners of the globe and all seven continents. National Geographic, BBC, Animal Planet, NY Times, and renowned magazines have used his photography. His patience for teaching and love of capturing the essence of his subjects make him one of our most popular tour leaders.

Agnès is a self-taught naturalist who studied environmental law and management; she is devoted to helping others discover nature and is a committed conservationist. She worked in partnership with the League for the Protection of Birds in France, initiating and leading a project developing access to nature for disabled people. She specializes in guiding in the polar regions and the Russian Far East, where she shares her passion for these fascinating habitats and their wildlife. Agnès is also a keen photographer and one of the authors of Journey to Antarctica.

A glimpse into our journey

Travel through Oslo, Norway on your way to Longyearbyen, Svalbard, Norway.

Arrive in Longyearbyen, Svalbard, Norway, for an overnight stay before boarding the ship the next day.

Longyearbyen is a Scandinavian town located on the island of Spitsbergen, the largest in the Svalbard Archipelago. Three other small settlements on Spitsbergen include another 1,000 people with most in the Russian settlement of Barentsburg. The rest of the 62,000 square kilometers of Spitsbergen, and the remainder of the archipelago, are largely pristine. While walking around Longyearbyen, you’ll be surrounded by tiny wildflowers beginning to bloom, and may encounter wildlife such as Svalbard ptarmigan and snow buntings nesting on the outskirts of town. Common eiders, parasitic jaegers (arctic skuas) and arctic terns nest along the coastal flats adjoining the town.

Embark on our ship

Today you can choose to do some last-minute shopping, visit the excellent museum next to the Radisson Blu Hotel, explore the shore for birds, or take a side trip to other locales along the coast of Isfjorden are available. You’ll board the ship in the late afternoon.

The waters around these islands are very calm compared to the Antarctic. Due to the shallow seas and the warming waters of the Gulf Stream, the climate is much milder than one would expect so far north. During this in-depth voyage, you will have ample opportunities to land ashore, Zodiac cruise, and view wildlife from the decks of our ship.

Flexibility is paramount in expedition travel. Our itinerary depends on the weather and ice conditions. We emphasize photography and observation of polar bears and other Arctic wildlife along with unique and beautiful landscapes, complying with local regulations regarding wildlife sightings in Svalbard. Our small group size gives us the flexibility to stay at a perfect photographic moment for however long needed according to the wildlife behavior and reactions.

Voyage through the Svalbard Archipelago

Your expedition will have an incredible amount of freedom to explore the Svalbard archipelago. In the land of 24-hr daylight, you’ll search for Arctic wildlife of all shapes and sizes. The region hosts a myriad of species that will present you with great opportunities to capture world-class images. Your small group expedition will have the time, flexibility, and freedom to cruise around the shores. When you land on shore, you’ll have the opportunity to hike, explore, and photograph wildlife and landscapes.

While walking, stay alert for nesting shorebirds, such as red phalaropes, terns, and skuas. Arctic terns and parasitic jaegers (arctic skuas) are quick to dive bomb if they are disturbed. While on land, keep an eye out for arctic fox and Svalbard reindeer (an endemic subspecies with very short legs) foraging during the plentiful summer months.

A note about Norwegian geography terms (as seen in many of the following place names): “bukta” means bay, “sund” means sound, “sundet” or “stretet” means channel or strait, “øy” or “øya” means island, “landet” means land or country, “breen” means glacier, and, of course, “fjord” or “fjorden” means fjord or inlet.

Liefdefjorden ~ You may sail to the mouth of Liefdefjorden and go ashore for a walk on the tundra of Andøya. Many geese feed on the tundra lushness at this time of year and you may also see the less common king eider. Monacobreen, with its five-kilometer-long face, is an impressive glacier at the end of this large fjord. Polar bears have been seen on the glacier, and the surrounding sea is a favorite feeding spot for thousands of kittiwakes.

Raudfjorden ~ Along the north coast of Spitsbergen, Raudfjorden is a beautiful fjord with spectacular glaciers. It is home to ringed and bearded seals, seabird colonies, and surprisingly rich vegetation.

Ytre Norskøya ~ The small island of Ytre Norskøya, on the northwest coast of Spitsbergen, has an accessible breeding ground of seabirds and is a beautiful place to hike along the colorful lichen covered cliffs.

Alkhornet ~ At the mouth of Isfjorden, the largest of all Spitsbergen’s fjords, you may land at Alkhornet where arctic foxes search the cliff base for fallen chicks. Also, Svalbard reindeer graze the luxuriant wildflower-covered vegetation, creating some of the best reindeer photography in the archipelago.

The entire group will disembark the ship in Longyearbyen around and either travel to the airport or into town for those departing later in the day.

Arrive home depending on your flight schedule.

Visit the Svalbard Islands and sail through Norway’s Arctic past glaciers to find a most mythic predator: the polar bear.

We chose the most well-equipped and comfortable vessel in the small ship class. The ice-strengthened hull and shallow draft enables you to explore and photograph channels and inlets other ships simply cannot navigate. The ship is equipped with Zodiacs for cruising and shore excursions. Enjoy excellent wildlife and scenic viewing from a large, dual-level observation deck at the front, and large windows in the social areas. The spacious and comfortable lounge provides room to relax, gather socially, edit photos, and attend informative lectures. You have your own private cabin for lower deck cabins (or shared for main deck cabins), all with private bathroom facilities. With only twelve passengers, this ship is perfect for exploring places bigger ships cannot navigate. 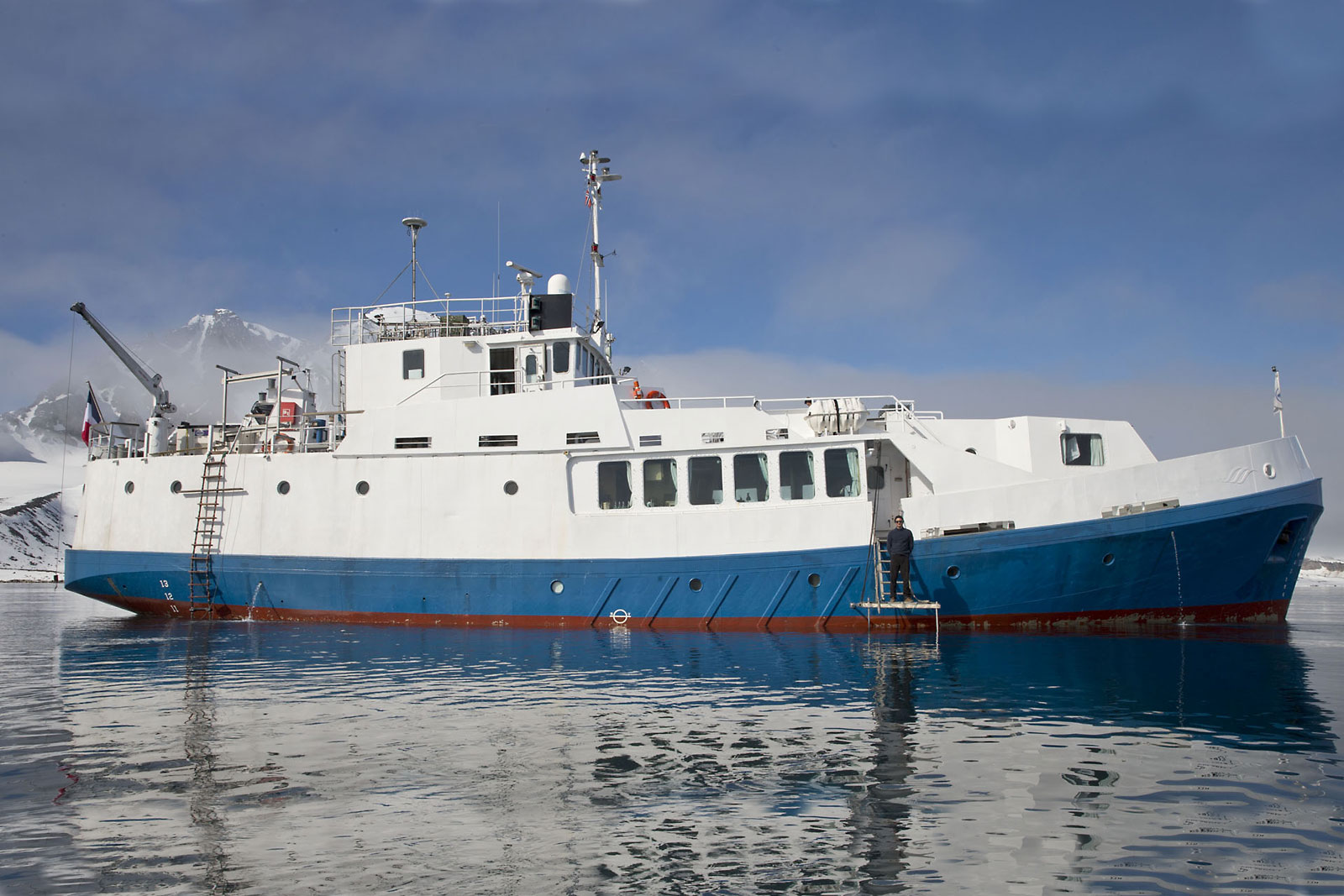 See additional photos from our participants.

If you are a single traveler, we will find a roommate for you at the hotel in Longyearbyen, but if we cannot find you a roommate, we may charge you a single supplement. If you prefer a single room for your night in the hotel, it costs extra and is subject to availability.

We cannot guarantee a specific cabin number, but if changes occur, we will assign a cabin of equal or greater value.


Payments are due based on the schedule above. All reservations require a deposit to confirm reservation of your space.

Refunds are given depending on the time left before departure according to the following table. The cancellation fee of $300 per person can be applied toward another trip if reserved within six months of the cancelled trip’s departure date. Cancellations are non-transferrable.

You will visit the Arctic during its summer with 24 hours of daylight. Weather patterns may be highly variable, so bring appropriate attire to handle a mix of weather conditions including wind, snow, rain, and sun. Expect temperatures in the 30s and 40s°F (0 to 9°C), but weather fronts can cause temperatures to either drop further or rise to the 50s and low 60s°F (10 to 17°C).

Airfare is not included in trip costs. Detailed logistical information and the contact information for our recommended flight-ticketing agent are included in the Trip Materials we will send you. Please let us know if you are arriving earlier or staying later in Longyearbyen, as we are happy to assist you with any extra overnights that you might want to arrange.

Why is this the best ship?

With only twelve passenger cabins, our ship is smaller than most ships in Svalbard, allowing you to travel farther and into smaller inlets than other cruise ships. Our small group size gives you the flexibility to stay at perfect photographic moments to capture world-class images, thus you will see things other ships miss. With two leaders and only twelve passengers, you will receive plenty of individual attention. We also use two Zodiacs to allow plenty of room for you and your photography gear.

Why do we sail in June and July?

A decent amount of sea ice is present during this time, which provides a good platform to walk onto the shore. When this “ice platform” melts, it is almost impossible to climb onto the shore and over the shoreline banks, which decreases the number of landing possibilities. Polar bears stay with the sea ice and actively look for and hunt seals, thus providing opportunities to see them. Also, very large seabird colonies nest along the cliffs during this time of year.

Will we see anything different in June vs. July?

Because our two expeditions visit the archipelago back to back, spanning four weeks, your wildlife encounters will not vary much, but the July expedition may have slightly more opportunities to see wildflowers.

Don’t let a fear of seasickness scare you away! For all but the most sensitive, seasickness is rarely a problem in this region. It’s a good idea to bring medication if you get seasick or are unsure, but you may find that you do not need it after a couple days once you have your “sea legs.” Even those who have experienced seasickness reported that the incredible wildlife and overall experience were well worth the temporary discomfort. Read our suggestions for coping with seasickness at coping with seasickness and contact us if you have any concerns.

An excellent tour, well organized, expertly carried out on a lovely ship with a fantastic crew.

The trip led by Scott Davis was outstanding in all aspects. No opportunities to see wildlife were left unexplored, and several times we were still out in the Zodiacs at 11pm, not wanting to leave the Polar Bears!